First Freddy, now Jason. Let’s face it, the best Friday the 13th movies are the first four, just about anyone who’s seen all 12 would agree. Everything after that is hit or miss, but Friday 5 holds a special place in my heart. I watched it for the first time as part of a double feature with Part 4 with my girlfriend in high school on New Years Eve.

It’s often revered as one of the worst films in the entire series, and I will agree that it’s definitely one of the cheesiest. There are SPOILERS in this blog, you’ve been warned. In Friday 5, we continue the story of Tommy Jarvis, the Corey Feldman character from part 4 as he struggles with his inner demons at a mental institution. Jason appears to be back from the dead and kills off just about everyone in the vicinity, but it turns out he’s just an imposter dressing up like Jason and trying to avenge his murdered son. I gotta give the filmmakers props for at least trying the idea out. It was risky, but ultimately unsatisfying. Maybe Shane Black and Drew Pearce should’ve watched Friday 5 before they completely ruined Iron Man 3 with their awful “Mandarin twist.” If you’re doing a sequel in a series, don’t mess with the villains, the conventions, or the mythology.

Friday 5 offers us some of the most annoying characters of the series. From the random greaseball dudes (the whiny one, and the dooshbag who’s singing some kind of jazz scat), to the troll-like coke-head ambulance driver and his ditsy waitress girlfriend, and finally to the filthy screeching redneck Ethel and her braindead son. All of the scenes with Ethel and her son make me cringe. Luckily all of these awful characters are killed off relatively quickly, Friday 5 is a movie that believes in the One-Stab-And-You’re-Dead-in-30-Seconds philosophy. Also the guy playing Tommy Jarvis looks like he’s about 15 years older than Corey Feldman, not just one or two. I read once that Corey Feldman wanted to come back but was too busy filming the Goonies. I wonder how much better 5 would’ve been if they’d had him for the whole film and not just the opening scene.

So what’s so good about this movie? It also has a few of the BEST characters in the series. You have the rare NOT annoying kid character Reggie the Reckless played by Shavar Ross. I find myself actually liking this kid and rooting for him. I also love his awesome girly shriek. We also have some of the hottest girls in the series. Debisue Voorhees (very ironic and awesome name for a Friday actor) is a busty beauty who seems to be addicted to sex. I sympathize with the homeless guy who watches her having sex out in the woods, then gets macheted in the gut for his peeping. 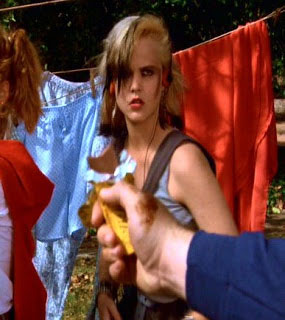 Then there’s Violet. Tiffany Helm plays Violet, a music addicted girl with 80’s crimped blonde hair, a bad attitude, and weird robot dancing skills. The first time I saw this movie I thought, why is this girl not the main survivor girl? She’s hot and she kicks ass! The character always stuck with me, and years later I based the main character Cyndi in my novel Kill River off of her. Taking an existing character and changing them up a bit, giving them a back story and a lot of insight is what really got me back into writing and I don’t think I would’ve been able to do Kill River without the influence of Violet Friday 5. If I could’ve made Kill River as a movie back in 1983, I would’ve cast Tiffany Helm as Cyndi in a heartbeat. I highly recommend watching Friday 5, then reading my book to see what Cyndi is supposed to look like.

Also this is the last Friday movie to be filmed in the summer. In the rest of them, the woods all have a bleak dead look, but in this one (like in parts 1-4) its lush, green, and clearly summertime. For me Jason movies have to be in the summer. I know there’s been talk of a snowy Jason movie in the future, but meh…that’s not really a selling point for me.

In addition to more Corey Feldman, I believe this would’ve been a much better movie with some of the story elements of part 6 mixed in. For the record, I hate part 6. It’s comedic self-aware approach, the terrible corny joke-laden dialogue, and the clearly winter-trying-to-pass-off-as-summer setting was just plain awful. But if they had used more of the plot of 6 in part 5, I’ll bet it would’ve rivaled part 4 as one of the best parts in the series.

There you have it: 1985, a guilty pleasure slasher movie year for me.